Zoltan Istvan is wrestling with the question:

“Should I Have Let My Daughter Marry Our Robot?” 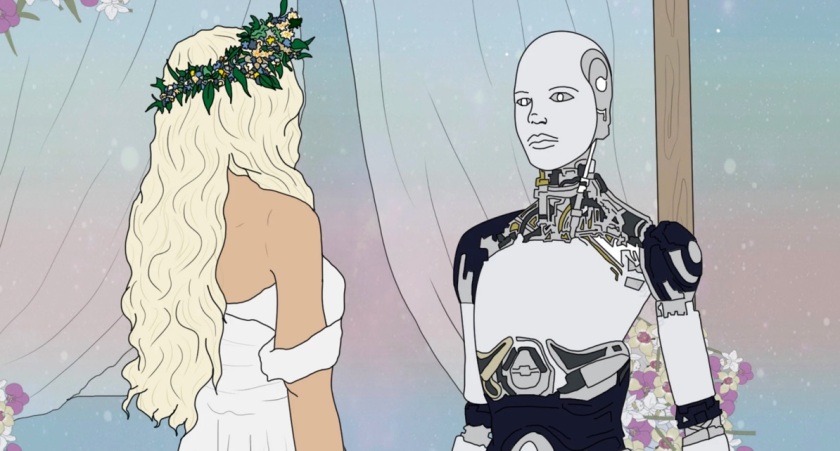 In a fascinating article in Metro.co.uk, Mr. Istvan asks some really important questions about the nature of relationships and being. He’s a transhumanist advocate, and that comes with some strong beliefs and presuppositions about human existence and our future. Will we evolve, or engineer ourselves into a leap beyond what we now understand ourselves to be, with our fragile bodies and limited minds? Perhaps; and the transhumanist movement is asking those questions and testing those boundaries.

What I find most interesting is the intuitive questions that come to a loving father who is trying to live in this worldview. At least two questions stand out to me: first, the future of his family line, and second, the nature of interpersonal connection, emotions, and intelligence.

He considers the implications for his daughter (she’s only five yrs/old in the core story, so it’s kind of a fun thought-experiment) if she someday marries a robot. Assuming advances in AI, mechanics, etc. we can imagine an artificial companion being smart, maybe even more intelligent (by many measures at least) than a human. But even engineers don’t seem hopeful about little things like reproduction. Can his daughter have children with a robot? Through some complex and expensive slight-of-hand, perhaps, but not real human reproduction. Is this a bad thing?

I wonder what social scientists gauge to be the point-of- no-return in terms of population if we eventually see many, many marriages that are not biologically capable of producing children? Leaving population aside, what about other unintended consequences of marriages that cannot produce children in the way biology says is natural? Will test tubes solve the problem? Images of science fiction dystopias come to mind. We might also note that this scenario applies to many more kinds of unions that are increasingly in vogue.

Istvan confronts his own preconceived notions about human emotion, personality, human-ness as well.

…perhaps it’s just my fears that are getting in the way of thinking of robots as living entities capable of all the traits humans are.

After all, our brains are three-pound pieces of meat firing billions of neurons to think thoughts and feel the way we do.

Because his worldview seems completely mechanistic and excludes the possibility of anything like a soul or spirit, could an artificial, engineered mind and consciousness become so much like a real personality that it would be impossible to distinguish the difference? Is this just fine? Would his daughter be just as happy, or happier, married to a more perfect partner?

My worldview tells me that there is something  much deeper that makes us human. We are created in the image and likeness of a Creator, and are composed of more than our meat sacks. We are more than our bodies and electrochemical reactions. We are spirit and soul as well. This is impossible to measure, and impossible to replicate. There is something special about human beings, something that gives every person infinite worth, and also infinite variety that can only be imitated, not truly possessed.

I really appreciate the questions Mr. Istvan is asking. He obviously loves his family very much and wants the best for his daughter. It’s important for us to wrestle with the implications of our worldviews and to do these thought-experiments to the logical ends of our beliefs. We can sometimes look to our culture’s stories for provocation, i.e. The Matrix, the Bladerunner films, Ex Machina, and many, many others. But when science fiction becomes real life, we really need to ask ourselves the big questions;

What makes us who we are?

Are we more than just our electrochemical/biological/physical selves?

Could we, and should we, strive to be disembodied minds, free from this physicality?

Or is our physical reality and our biology–even with its limitations–something unique and special and something to be embraced and honored?

I'm a husband, father, and adopted child of God. Vocationally, I'm a visual storyteller; that means filmmaker with all its possible variations as the world of visual storytelling grows and changes. I like to tell and pass on stories that help people find the place where their deep satisfaction meets the others' deep needs. View all posts by TomK

This site uses Akismet to reduce spam. Learn how your comment data is processed.