I’m happy to say that, after a long time of lagging behind the iOS world, Android devices and apps are finally available to enable professional production on this platform.

And, because most people in the world are using an Android device, it makes sense to think about recommendations to help them, especially non-professional media creators, to choose the best tools for their video content.

For serious video content production, you may want to consider a video-specific app. While almost every general camera app allows you to choose still image capture or video capture (maybe even animated GIF and other formats) there are a few dedicated apps that only shoot video. I highly recommend checking these out, even if they add an app to your collection (who can resist just one more app?!)

Why would you choose a video-only app?

One reason is because a good dedicated video app will have controls that are designed for video shooting and you won’t get settings mixed up when switching between modes on a normal camera app. For instance, this can happen when switching between 4:3 aspect ratio high-definition still images and shooting HD video, which is typically 16:9 aspect ratio on your screen. Some apps choke a bit when switching. And, some apps are set to automatically start video recording when you switch to video mode. I can’t figure out why that’s a default feature (sometimes non-defeatable) but it’s a pain when you’re trying to shoot dedicated video. Ultimately, dedicated apps are designed for video shooting, and make the most of their interface and features.

As with still image capture apps, the image quality from these is essentially the same, if you shoot with the same settings (resolution, data rate, picture profile, etc.) The device hardware is really the defining and limiting factor. [BIG NOTE for low-end phone users; some of these apps are not recommended for you. Filmic Pro won’t even install on my Samsung Galaxy J5 (Marshmallow OS). My best advice if you have a low-end device is to go with a standard camera app, like Open Camera, that lets you shoot stills and video. No need for a specialized app.]

Here are three dedicated video capture apps that are the top of charts for me. I’ll review them in my general order of preference, but they’re all very good. Any weaknesses are generally pretty minor.

Among mobile filmmakers and mobile journalists, Filmic Pro has long been the go-to app. It started life as an iOS-only app but the Android version is fully developed and gives you a full feature set for truly professional video production on a mobile device. 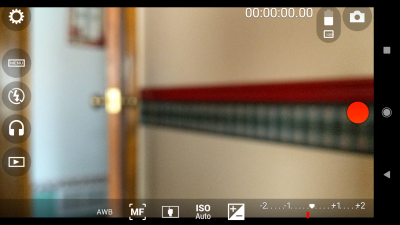 Cinema FV-5 is a companion to Camera FV-5, which I’ve reviewed elsewhere. But it can also be purchased and used separately as a dedicated video capture app. As with Camera FV-5, the Cinema version is full-featured and well-suited to professional mobile production. If you want a dedicated app, I feel it’s the best choice for lower-end devices, even if features are disabled.

On a low-end device like my Galaxy J5 I found:

Cinema 4K is designed with many professional features for high-end devices. As the name implies, it can shoot up to 4K if your device can handle it. It is set up for more experienced shooters, but I find the controls are very intuitive and responsive.

I’m reviewing this app with a caveat. On my Google Pixel 2 (still pretty state-of-the-art as I write this) I get great general image quality. However, I see a lot of motion artifacts anytime I pan, tilt, or have a lot of motion in the shot. I’ve tried to track it down, and have decided it’s the app. My A/B testing with Filmic Pro on the same device shows ‘jerky’ motion in footage from Cinema 4K versus Filmic Pro footage, with the exact same settings. I’m willing to consider that it could be unique to the Pixel 2, so until I can do more tests with other phones, I’ll just leave it at that.

I'm a husband, father, and adopted child of God. Vocationally, I'm a visual storyteller; that means filmmaker with all its possible variations as the world of visual storytelling grows and changes. I like to tell and pass on stories that help people find the place where their deep satisfaction meets the others' deep needs. View all posts by TomK

This site uses Akismet to reduce spam. Learn how your comment data is processed.